Here is the thread of positive farmer stories of Vidarbha by team SRT.

Mr Prakash Khobragade of Mul, Dist Chandrapur has been the first farmer to have taken cotton by SRT method during Kharif (July 2017-Feb 2018). He is amazed and happy to have adopted this method. According to him the permanent raised beds are helpful in the heavy clay soils; and the cotton crop can thrive very well with this system. He has planted a single row per bed with two feet plant to plant distance. But he thinks three feet plant to plant distance could be better. He is going to leave the roots of the current crop in the soil of the same bed. He is not going to plough the land. He will rotate the crop either with Soya bean or Toor (Pigeon pea). He will use weedicides instead of ploughing or inter cultivation. For the current cotton crop he used less than half the fertilizer than with the conventional method and only two insecticide sprays at the same time visually doubling the crop productivity. His present crop stand is quite healthy & most importantly Prakash is overwhelmed with happiness and confidence in his SRT work.

Mr Dilip Parwate of Nagbheed, Dist Chandrapur has an amazing experience to share about the insect resistance achieved through SRT. The two side by side plots, one cultivated through the traditional puddling method has attracted sever attack of brown plant hopers even after two times spraying of insecticide. At the same time a SRT plot right next to the traditional plot of same variety of rice, has got no sign of any such attack even without use of any insecticide.

Mrs Anita Navghare a women farmer from Aarmori, Dist Gadchiroli says: I visited Saguna Baug in Raigad district and learned the SRT technique. My SRT plot makes me cry with happiness. I become very happy, very happy, very happy!!! whenever I visit the plot. My cost of production was just half of what I am used to. Also previously I used to get 22 bags of paddy from this plot but now I expect at least 35 bags of paddy. With this method I had to use very little outside labour and at the same time all of them were very happy to use this simple new technique. I get many visitors who wish to adopt the SRT technique after seeing the beauty and productivity of my farm.

A farmers meet of 400 plus farmers was organized by Krishi Utpanna Bajar Samiti (A local farmers body), Sadak Arjuni, Dist Gondiya. The local group leader Dr Avinash Kashiwar took the lead after reading about SRT in Maharashtra Sinchan VIkas Magazine. The farmers at the event were extremely enthusiastic due to SRT’s ability to outperform the conventional method especially during shortages of rainfall this year. 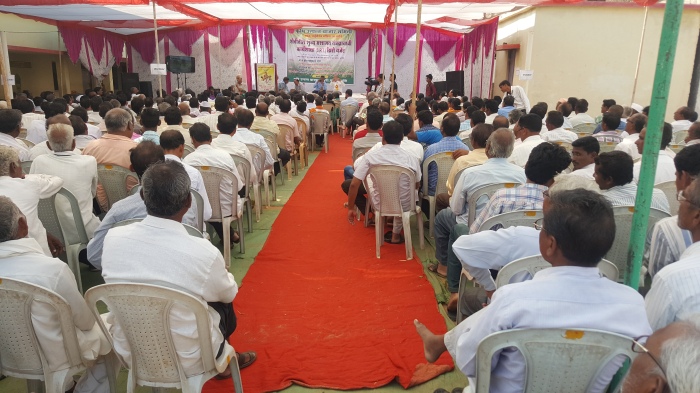 Mr. Surendra Madankar of Bhandara was able to demonstrate a startling example planting rice with SRT and traditional method with the same variety, with the same date of sowing of rice & side by side. Take a look at self explanatory photos (of the height & roots system) and the link of the news covered by ABP Maza. 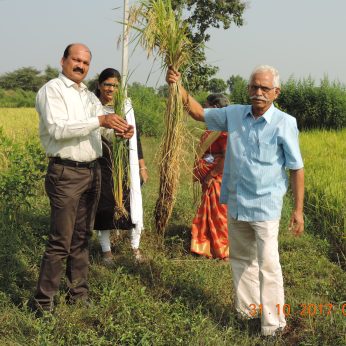 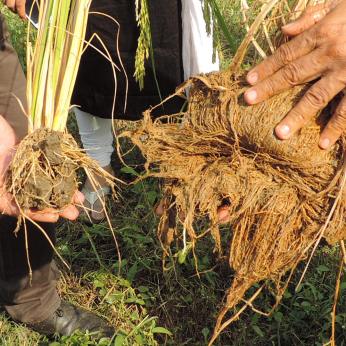 A Noteworthy example of a top dutiful official : When we met this top official for a very short time available to him and explained the SRT efforts with Vidarbha farmers, he not only wrote confidence giving words but also donated 10 SRT frames to Vidarbha farmers from his personal a/c. This generosity towards team SRT and the farmers is worth a million tons. 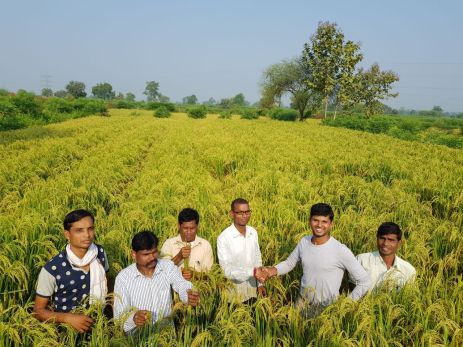 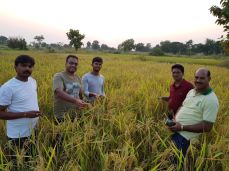 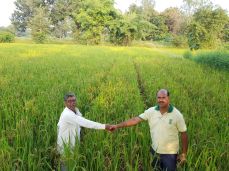 SRT (Saguna Rice Technique)  Definition:          It is a Conservation Agriculture (CA), Zero Till method of farming which does not cause atrocity of tillage, completely stops soil erosion, promotes natural production of earthworms, increases organic carbon of the soil, considerably increases productivity of the land and added effect of amazing success, happiness and confidence to the farmer.

6 thoughts on “Newsletter No. 15 – Thread of positive farmer stories of Vidarbha”